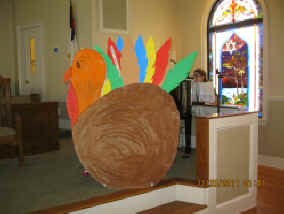 About three weeks before Thanksgiving I placed the ABC's on the wall around the Children's Church room (one letter per construction paper piece). I asked the children to think of things they were thankful for (out-of-the-box things). I wrote six to ten things they thought of on each letter. We did this in alphabetical order, but every now and then a child would think of something for a previous letter. This actually took three weeks to get through the full alphabet, because I asked them "why" they were thankful for each item. Some of the items were quite interesting and I had to be on my toes to come up with why we should be thankful for these items (snot, because it keeps dirt and things from getting into our lungs; lice, because they give monkeys things to eat when they pick them off of other monkeys; Zaxby's, because it gives some people a job, etc)

The Saturday prior to Thanksgiving, using 1/2" blue Styrofoam board (from Lowe's), I made a large turkey body (about four foot high) with no tail feathers. I made large tail feathers and wrote all the things the children were thankful for on the backside of each one. I hot glued paint stirrers (donated by Lowe's) on each feather and made a place for the children to push the end into on the back side of the turkey so they would stay (see below).

The next day, the Sunday before Thanksgiving, the children were given a feather and went to the microphone to read off the items on their feather. (I had a mother by the microphone to help them.) After they read, they placed the feather into the tail end of the turkey. The congregation really got a kick out of some of the items they were thankful for; as you could imagine by the examples I gave you. This is a great program for small churches too, as each child could do more than one feather if needed.

On the back of the turkey I used a long strip of Duct tape then folded it lengthwise so it stuck to itself. Then I placed it across the back of the turkey and added upright pieces about 1 inch apart (see below). The paint stirrer sticks fit snuggly into those spots. Some of the feathers needed to be taped a little to keep them from leaning over.

Return to the Lessons & Sermons page.

You can make a difference!
Your purchases and donations to the site help to distribute our children's ministry resources to churches across the world.