A fun and exciting new way to learn God's Word. With multiple ways to play! 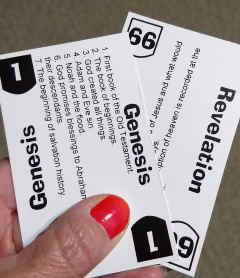 The Bible was written over a 1500 year period, by a wide variety of authors (as many as 40), from many different locations. Its authors are from all walks of life. Some were kings, some peasants; still others were philosophers, fishermen, doctors, judges, scholars, poets and farmers. Despite the span of time and the diversity of writers, it is one book, with one common purpose: to reveal God's salvation plan to us. The Bible was written under the inspiration of the Holy Spirit to benefit all who read it.

Players "stack" their Bible cards in order from Genesis to Revelation. Three ways to play! With multiple, unofficial ways to play listed below. Challenging game play for older and younger players! If you like Racko, you'll love Bible Stack-O! Great for after-school clubs & classrooms too! Ages 8 and up. Order Bible Stack-O!

Play "Can You Name That Bible Book?" (Answers @ bottom of page.)

1) "This book was written by a shepherd from Judah. He told the people of Israel to repent, turn from their sin, and follow God. He told people to help the poor and treat others fairly."

2) "In this book, his wife was not loyal to him, yet he continued to love her. His marriage illustrated how God loved his people even though they continually sinned against him."

3) "In this book, he wrote the stories Peter told him about, what it means to follow Jesus, and how to be his disciple. It is the second book in the New Testament, but the first Gospel written."

Play "Bible Memory" (For two players or two teams.)
You'll need two decks of Bible Stack-O! cards. Played similarly to the classic Memory Card game whereby players lay cards face-down in rows on a table and take turns turning over two cards at a time to find the pair. (Before playing you may want to separate the Old Testament cards from the New Testament cards so that you don't have too many cards laid out on the table at one time.) The game is over when all the cards are matched. The player or team with the most matches wins. Order Now.

Play "Go Search Your Bible" (For 2-4 Players)
This game was developed by Blake Butler, age 10 of Whiteland, IN. Blake plays his Bible Stack-O! cards similarly to the classic card game, "Go Fish."

Object: Get the most stacks of cards (a stack consists of 4 cards in exact sequence).

How To Play: If playing with three or four players deal 5 cards each. If playing with two players deal 7 cards each. Place the remaining stack of cards face-down at the center of the playing area (the draw pile). Players arrange the cards in hand into sequential order. If a stack is made (four cards in exact sequence), players lay the stack down then draw four more cards to bring their hand back to the right number of cards. Youngest player goes first by asking another player for a card from his or her hand to better the sequence of cards in hand. If a player has the requested card, he or she must give it to the player. If the player doesn't have the requested card, he or she responds by saying, "Go Search Your Bible". At which point the player requesting a card must draw from the deck until a card is drawn to better a sequence in hand. Play continues clockwise, playing as before.

The game is over when the draw pile is depleted. Player with the most stacks wins.

Taking the place of the aces to play off - I used the Genesis, Micah, Matthew and Revelation cards as "Key" cards when they came up in play. Set the game up like solitaire - with the 7 stacks of cards. To play, each pile of cards are to be sequenced either up (or down) from the card that is flipped up. This way you have at least 7 different sequences of Bible books going - PLUS playing off of the 7 stacks on to KEY cards (like you do with the aces in regular solitaire). Whenever the "Key" cards are flipped up in play - they go to the top (like in solitaire) and from there cards can be played ascending from OT - Genesis - descending from Micah - ascending from NT - Matthew - descending from Revelation until all the books are played off of the piles onto the Key cards. This puts the Bible books in order. When a card can be played on the Key cards, you can play the whole sequence that has accumulated on one pile - but - initiate moving the sequence of cards only if the top card or bottom card in the sequence - is the card needed for playing off onto the Key card sequence. You cannot take a card from the center of the sequence to play onto the Key card.

What you need: spoons and a deck of Bible Stack-O! cards.

How to Play: Give players four cards each. The object is to get four cards in exact sequence. The dealer also takes four cards and places the remaining deck faced down for the draw pile. Place a set of spoons at the center of the table (one for each player, minus one). At the go dealer draws a card from the deck and if it's needed to better the sequence of the cards in hand, the card is kept and one from the hand is then passed faced down to the player on the left. If the next player needs the card it is kept and another card is passed from hand, or it is passed to the next player. Play proceeds very rapidly as dealer draws a card and either keeps it and discards a card from hand to the next player or continues to pass the card from the deck if it's not needed to better his or her hand. Each player proceeds in the same manner. If the card passed is needed to better his or her hand it is kept and a card from hand is passed, and if the card passed is not needed, it is passed to the next player. The cards are passed one at a time in rapid procession from the dealer clockwise and end up in a "trash pile" next to the dealer. The excitement arises when a player gets four cards in exact sequence, at which time that player grabs a spoon, which signals the rest of the players to grab a spoon too. The player that cannot grab a spoon scores an "S" (remember, there is one less spoon per people playing). Play continues with the player to the left of the dealer becoming dealer in the next round of play. The first player to spell "Spoons" is out and one spoon is removed from the table. Play continues until one player is left.

Get all 66 Bible cards. Order Now.

Got a new way to play Bible Stack-O!? Send it to: submissions@SundaySchoolNetwork.com

Answers To, "Can You Name That Bible Book?":

You can make a difference!
Your purchases and donation to the site help to distribute our children's ministry resources to churches across the world.